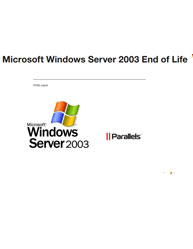 Windows Server 2003 is still being used, even though it has been over 12 years since Windows Server 2003 was released and it lost Microsoft's product update support one year ago.  Industry experts estimate that there are more than 10 million machines across the globe still running WS2003, and many will continue to do so for various reasons until EOL or close to that date. In the past several years, Windows® XP and WS2003 have played a very important part in the progress of companies’ IT infrastructures. It should be a cause for alarm that so many businesses still rely upon an operating system originally released almost 10 years ago. This white paper is a guide on easy server migration and upgrade planning to avoid last-minute, frantic, stressful, and risky forced migration, ensuring continuity of service, support, and security.