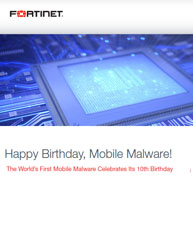 From Cabir to FakeDefend, the last decade has seen the number of mobile malware explode. In 2013, Fortinet’s FortiGuard Labs has seen more than 1,300 new malicious applications per day and is currently tracking more than 300 Android malware families and more than 400,000 malicious Android applications. Besides the sheer growth in numbers, another important trend to note is that mobile malware has followed the same evolution as PC malware, but at a much faster pace. The widespread adoption of smartphones--and the fact that they can easily access a payment system (premium rate phone numbers)--makes them easy targets that can quickly generate money once infected. Furthermore, they have capabilities such as geo-location, microphones, embedded GPS and cameras, all of which enable a particularly intrusive level of spying on their owners. Like PC malware, mobile malware quickly evolved into an effective and efficient way of generating a cash stream, while supporting a wide range of business models. In the following chronology, FortiGuard Labs looks at the most significant mobile malware over the last 10 years and explains their role in the evolution of threats.

2022 All Rights Reserved | by: www.ciowhitepapersreview.com