"How to automate and what are the automation testing tools?" 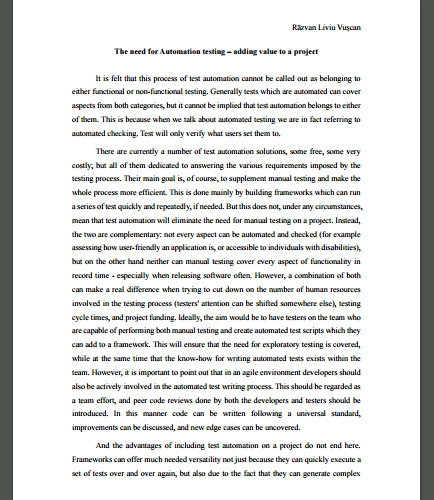 The Need for Automation Testing- Adding Value to a Project

Automation testing mainly supplements manual testing and makes the whole testing process more efficient. This whitepaper discusses about the advantages of including automation testing on a project, and how it provides a clear idea to testers, developers and clients about the functionality of product in order to overcome failures.

Introducing automated testing involves higher costs, but it also depends on key factors such as:

What is Automation framework?

An automation framework is nothing but an integrated, rigorously structured system, capable of establishing a set of rules for the test automation of a software product.

Why is it necessary to include Test Automation Framework?

Test automation framework contains libraries, methods, test modules, resource and configuration files, and documentation needed to run on specific product and can easily enhance the functionality by selecting or removing the components to fit the current project realities.

This whitepaper guides you on:

How to automate and what are the automation testing tools?

What are the three types of Automation framework models and how do they differ?

2022 All Rights Reserved | by: www.ciowhitepapersreview.com