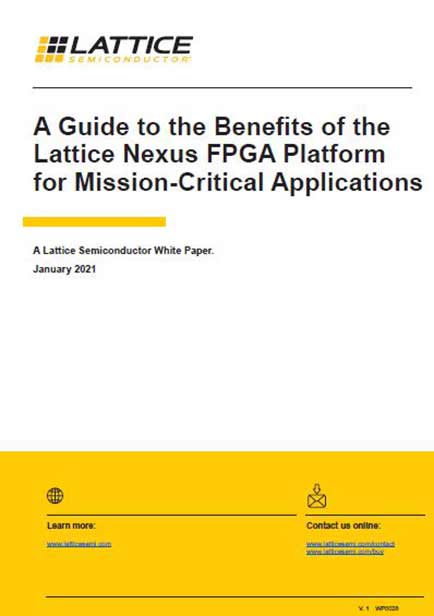 There is growing demand for mission-critical applications in the industrial, automotive, communications, aerospace, and defense markets. Today, the Lattice Nexus™ Platform provides a true differentiator for FPGAs destined for use in mission-critical systems.

Today’s mission-critical systems can require significant computing power. One well-known computing solution is to use microprocessor units (MPUs), such as those found in PCs and workstations. Although these processors may appear to be powerful, in reality all they are doing is performing simple operations like adding two numbers together or comparing two numbers to see which is larger. Similarly, although they may appear to be fast, this is because their system clocks are running sequentially at 2.4 GHz or higher.

The real issue is that, while MPUs are good for performing decision-making tasks, they can be inefficient when it comes to performing many data processing assignments. As a result, MPUs tend to consume large amounts of power and generate a lot of heat while performing their duties.

A more efficient way to perform signal and data processing in embedded applications is through the use of field-programmable gate arrays (FPGAs). FPGAs benefit from an inherent parallel architecture to run data processing operations in parallel with low latency. As was noted in the column Fundamentals of FPGAs: What Are FPGAs and Why Are They Needed?: “At the heart of any FPGA . . . is its programmable fabric, which is presented as an array of programmable logic blocks. Each of these logic blocks contains a collection of elements – including a look-up table (LUT), a multiplexer, and a register – all of which can be configured (programmed) to act as required.”